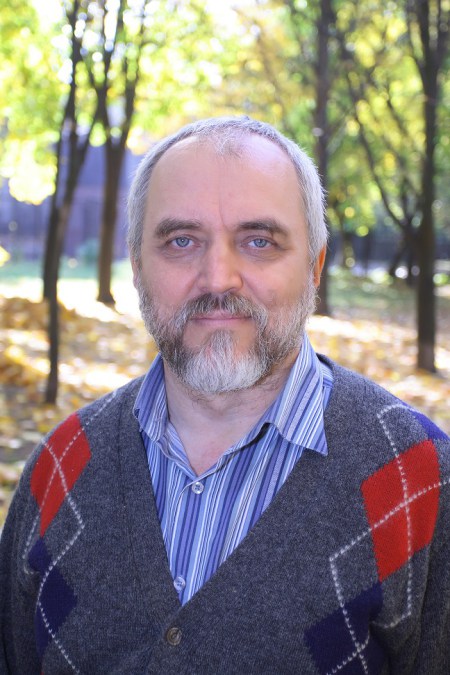 I know him since 2008. During this time, he worked his way up from student of Physics, Electronics and Computer Systems Department to postgraduate and lecturer of Group of Applied and Computer Radio Physics at Oles Honchar Dnipropetrovsk National University. I was his scientific consultant for the thesis “Bragg resonances in layered structures with linear and nonlinear elements”. This thesis has been successfully defended in February 2014. I had an opinion about him as inquisitive student, creative scientist, conscientious and active employee, reliable friend and sincere person.

The techniques of computer modelling of microwave scattering processes onto quasi-periodic apodized Bragg structures have been developed as part of the dissertation work. The theoretical results are confirmed by experimental studies of Bragg reflectors and resonators. All stages of the experiment have been carried out by him personally. In the research process he has developed the computer simulation program of pulses, beams and wave packages scattering on Bragg layered structures with different distortion types of periodicity. Furthermore, the programs of eigenvalue computation (complex frequency, complex permeability, and some others) of resonant layered structures and hysteresis phenomena investigation in structures with non-linear layers and lumped elements have been established. Considered structures are promising for creation new types of storage devices.

His results were published in eight articles in specialized scientific journals (including the American magazines “Progress in Electromagnetics Research B” and “Telecommunications and Radio Engineering”) and 25 papers of international conferences. At international young scientist workshop on “Optics, Photonics and Metamaterials – 2009” (November 25-27, 2009, Kharkiv National University of Radio Electronics, Kharkiv, Ukraine) he received “The Second Award”. He reports were also awarded at the IX Kharkiv Young Scientists Conference “Electromagnetics, Photonics and Biophysics” (Kharkiv, 2009) and XXth IEEE International Seminar/Workshop on “Direct and Inverse Problems of Electromagnetic and Acoustic Wave Theory” (Lviv, 2015).