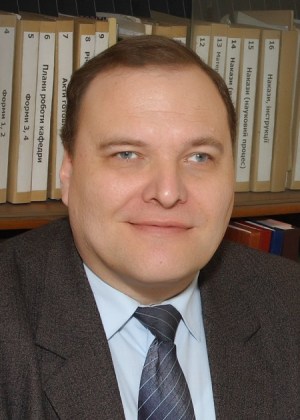 I know him from the moment when he was enrolled at the university in 2002 till now. He was a diligent student demonstrating strong interest in mathematics and physics as well as high work efficiency.

As a student, one day he came up to me and asked me to be involved into overtime scientific research activities carried out in our department. Since then, I became his scientific supervisor and helped him to do the first steps as a researcher and experimenter dealing with inverse problems of electrodynamics. Later I guided him in his bachelor degree and then master degree works. After his graduation from the university with honors degree in 2007, I continued supervising him in his Ph.D. thesis research that resulted in successful graduation in 2011.

During his research activity, he always sought the possibilities for automatization of the process. He actively used Fortran, Matlab, Mathematica and other programming languages to develop applications that helped him to derive new results, check hypotheses, estimate quantities and so on. It was very modern and efficient style of scientific researching.

He was my co-author in 7 scientific papers and one monograph. For the monograph, he provided contribution at every stage, from new material acquiring and content decision-making, to proofreading and design. This monograph won 2nd prize in regional contest of publications between high schools in 2014 partially due to his hard work.