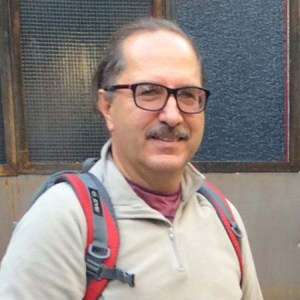 I meet him in 2013 when our epilepsy department begin to collaborate with his employer company. We work together to introduce a large spiking network where Hodgkin-Huxley-like equations govern time evolution of neurons. We had a prototype application implemented in Matlab, but its capabilities were insufficient for a simulation of relatively large networks being the most realistic to simulate brain.

He took guidance of the project as a contractor’s developer. First of all, he designed a computational core of the application from Matlab to C++ and provided a parallelization of the core process so that we became able to carry out simulation on a provided computer cluster. Then he implemented several biophysical mechanisms to the network, e.g. a delay in spikes propagation, a spike-timing dependent plasticity, a dynamic release probability and so on, to make our model closer to the natural one.

As a result, we obtained a distributed software system where Matlab part provides only a graphical user interface for a setting input data and a visualization of output data, and C++ part provides the core computing facilities. It is very convenient that now I can work in the friendly environment on my local machine under Windows and launch the simulation on a remote Linux cluster just in couple of clicks. The performance and the maximum allowed (almost unlimited) number of neurons of the network were improved considerably in comparison with the prototype application.

Due to the new software, we acquired new data mentioned in this paper. Till now, he provides support of the software and helps preparing a new paper that exposes experimental material obtained with the simulations.

I have a positive impression about the results of our collaboration and may confirm his professional qualification as a software engineer.

“It is important to do everything with passion, it embellishes life enormously.”